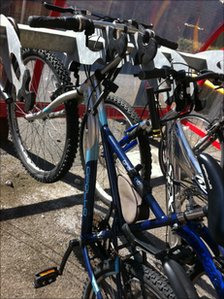 The BBC has reported that Police in Oxford are urging residents to register their bikes so they can be traced if they are stolen.

According to the BBC between June and August, 837 bikes were taken in the city – a rise of 141 compared to the same period in 2010.

Sgt Matt Sulley from Oxford police station said bike theft was a huge problem and returning cycles to their owners was the biggest issue.

He said if cycles are registered at immobilise.com police can easily identify the original owners.

Sgt Sulley said the large number of cycles in Oxford made thefts a particular problem.

He said that also the large portion of old-style houses in the city meant it was difficult for people to access gardens and sheds to properly secure their bikes.

There are also criminals making a business out of it. Lots of bikes are being stolen and then stripped for parts which makes them very difficult to trace.

We have also seen a number of very expensive bikes, worth thousands of pounds, locked up with cheap locks.

Between 5 and 25 September 2011 neighbourhood policing teams will be at key locations in Oxford advising people about ways to protect their property.