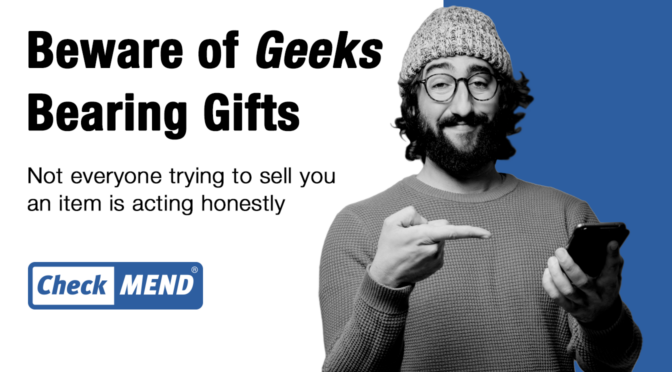 By Les Gray, COO of Recipero

Ok, so not everyone looking to part with valuable used consumer electronics is a ‘Geek’.  The proverb shamelessly mangled for this post’s title does neatly sum up a note of caution though – not everyone trying to sell you an item is acting honestly.

Mobile phones are undergoing a massive increase in fraudulent sales, reflecting a wide-ranging change in the marketplace for how phones reach consumers. Many companies are now providing new or refurbished phones on rental agreements. These are attractive propositions, enabling the consumer to obtain a cheaper handset for a lower monthly cost than the traditional network-subsidised model and the ability to upgrade or cancel almost at will.

The problem for traders with this market shift is the number of phones being fraudulently sold or offered as collateral for pawn or buy-back transactions is increasing rapidly.

Many traders check whether a phone is blocked on mobile networks. This check identifies a small subset of stolen phones reported to the networks. However, it amounts to shutting their eyes to the presence of loss and theft reports from police, insurers, the public and corporate owners.

Only CheckMEND has access to Recipero’s Crime Reduction Ecosystem, a massive collection of devices (not just phones) that are stolen or will become so if sold. Millions of devices are rightfully in possession of consumers but not owned by them, and they have no right to sell. The shift in market conditions has recently grown this class of phones by 10% month-on-month during 2022 and is accelerating, widening the already significant gap between network-blocked phones and stolen phones.

An analysis of 30,000 phones from one recent month’s trade, found over 1,000 stolen items valued at almost £200,000. Not a single phone was network blocked when offered for sale. Pawn or buy-back transactions may feel more secure as the customer often redeems the phone. However, 40% become blocked up to eight weeks after the transaction; plenty of time for the careless trader to resell the phone, only to have a disgruntled customer return when it stops working. Perhaps worse, that customer tries to sell their phone only to fail because of the stolen record—double trouble and cost for the unfortunate trader.

CheckMEND is the only due diligence system compliant with the UK Recycler’s Code of Best Practice, and the above should clarify why. The world’s biggest companies that create markets for mobile phones trust us to track their property and detect and prevent its theft. Their trust in us is why CheckMEND’s due diligence service is both unrivalled and growing at an increasing rate.

Are you buying phones without running CheckMEND checks? Are you confident that you are doing enough? Contact us for a free, no-obligation analysis of historical transactions. Every stolen phone we identify that you’ve missed will have the corresponding information provided so you can take action on it to reduce the risk you’ve previously assumed.

Remember, network block checking is not the same as avoiding buying stolen property.